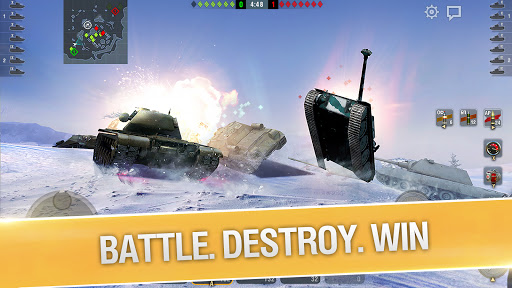 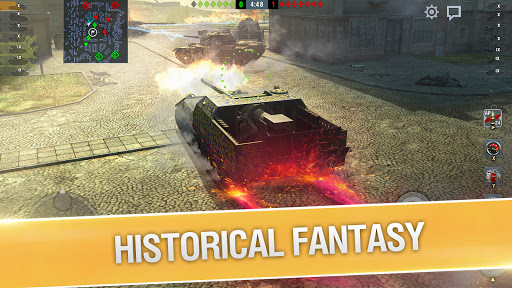 Meet a truly MMO shooter for your mobile device! Become part of a community of millions of players from across the world, take a vehicle into your first massive tank battle, fight in a 7×7 format, and win! Check out the extraordinary variety of vehicles, maps, modes, and possible strategies in this online tank shooter game!

You'll discover an enormous and action-packed world of tanks—historically accurate World War II vehicles from the USSR, Germany, France, Japan, Great Britain, China, the USA, and many other countries. You’ll also drive experimental vehicles that have been brought to life based on blueprints created by famous real-life engineers, vehicles inspired by well-known anime series, and armored monsters from popular alternative universes. There are over 400 vehicles to choose from!

There's always room for growth as you progress in this PVP shooting online war game with its well-developed progression system. You’ll research a wide array of vehicles, from Tier I tanks to monstrous Tier X machines. Change the guns, customize the equipment, and apply camouflage to increase your chances of survival and domination. Tune your combat vehicle to specifically match your playstyle, the battle type specifics, or mode.

You’re unlikely to get bored. No tank battle is the same. Regular in-game events that feature Collector and Premium tanks as rewards alternate with new game modes that will change the way you think of army multiplayer shooting games.

Discover a multitude of maps. Tank battles will unfold on a variety of different and distinctive arenas. Normandy at the moment when the turning point of WW2 occurred. The post-apocalyptic Wasteland, scorched by an oppressive radioactive sun. The Mediterranean coast with its ancient ruins. A snow-covered base at the edge of the world, a metropolis, desert sands, an eastern city… And even the Moon! There are over 25 battle arenas, each with its own distinct features.

You're never alone. Want to play together with a friend? Create a platoon. Want to collaborate on a bigger scale? Join a clan to enter battle as part of a pack of like-minded players and seek glory in Rating Battles or participate in tournaments with prizes! Coordinate your actions in this multiplayer game—annihilate your enemies together!

Expect it to be spectacular. The game is automatically optimized for your device. Enjoy the eye-catching features of every battle arena, highly detailed tank models, massive explosions, and flying blown-off turrets. Manual settings will help you find the balance between fantastic visuals and high FPS.

World of Tanks Blitz is not just a mere war game or shooter, it's a tank universe that lives, breathes, and evolves on your phone or tablet. Hurry to enter the game and start your engine!
The game is suitable for adults and children over 12 years old. The game requires at least 2.5 GB of free space and an Internet connection. Learn more at https://wotblitz.com/
2021 Wargaming.net

- New map! Coal mounds, a huge factory complex, and a demolished bridge—pay a visit to Ghost Factory.
- The MS-1 is back! Get this legend in the event The Old Guard.
- British national crew voiceover! Turn it on and enjoy the stylish accent.
- Two modes! Join crazy Mad Games and demanding Realistic Battles.
- Operation Landship and the Dreadnought tank. Win cool rewards!